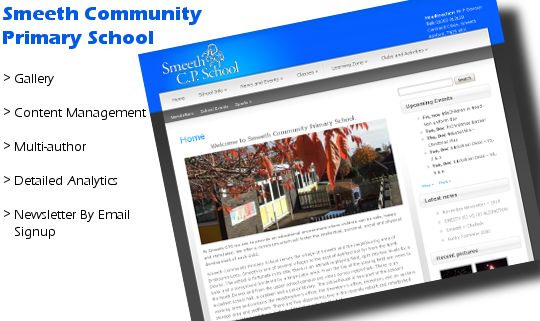 Smeeth Community Primary School is a village primary school in East Kent. Their existing website was created a number of years ago and caused a few problems. Firstly, it was unwieldy, with the whole website needing to be uploaded for any minor change. Secondly, only one member of staff had the knowledge of how to update the site. Finally, the site was not standards compliant and worked very inconsistently across different browsers.

Smeeth were keen to replace the site with something more visually attractive, that also allowed staff and pupils to contribute content so that it was a useful source of news and information about the school.

A working group of governors and staff was formed, with Four Lakes contributing also. The group decided on the scope of the project, and liaised with Kent CC to ensure that the outline proposal to create a new domain name and utilise WordPress was acceptable to them.

Questionnaires for parents, pupils, staff and prospective parents were designed, distributed and results collated. They showed that the existing site was not used much, but that a new site would be of interest.

The working group agreed that the initial site structure should contain the following:

In addition, Four Lakes was asked to create new email accounts for staff and pupils using the newly registered domain name, as this would be easier to maintain than the existing setup.

A ‘soft’ implementation was agreed, whereby the old and new sites would co-exist for a short while. There was also a need to train relevant staff and a pilot group of pupils.

Using WordPress, and a theme from Elegant Themes, Four lakes created a clean site following the structure agreed by the Smeeth CPS website working group. Where possible, content was lifted from the old site and inserted into the new one. Where there was no existing content, staff or governors provided what they could, although some areas were left fairly sparse in the knowledge that it would be possible to populate them later.

Each potential content provider was allocated their own user id for the site, giving them an appropriate level of access. Pupils will be able to create, but not publish content. Teachers are able to moderate and publish their own and the pupils contributions, as well as update anything already on the site. New email accounts were linked to the website logins.

Through the extensive use of plugins, Four Lakes was not only able to meet the basic requirements laid out for the site, but could also provide some extra features:

The SmeethCPS site is now fully live, and the old site has been removed. The site continues to evolve and Four Lakes is providing ongoing support and training to ensure the school utilises the website to its best advantage.