So, a month ago I blogged about how an Android phone might be the best mobile email option for SME’s, and stated my intention to obtain an Android handset, specifically a HTC Hero, so that I could give you the low-down on whether or not the promise is fulfilled. I would have blogged earlier, but Vodafone being Vodafone, upgrading my existing handset to the one I wanted was not straightforward. Indeed, in the end I obtained a handset through a third party provider, whilst retaining my Vodafone account. If you want to get a HTC Hero on Vodafone then you’ll have to do the same. 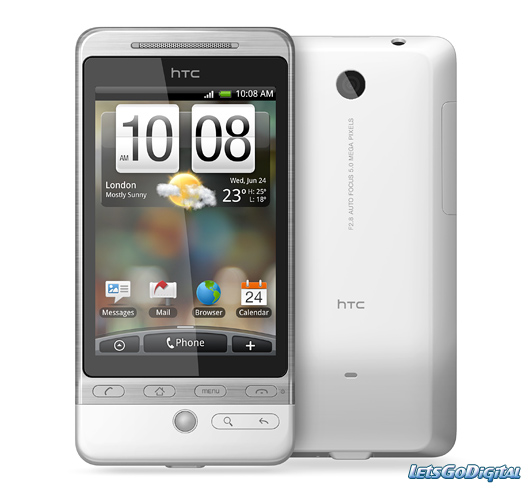 Is it worth the hassle? So far, a few days into Hero ownership I can only say YES…absolutely! Leaving the love-or-hate aesthetics aside, the HTC Sense UI that runs on top of the Android operating system is a joy to use. The configuration and customisation options are almost literally endless, I’ve certainly only scratched the surface so far. The browser has been excellent at rendering the small number of web pages I’ve looked at so far, and the range of applications available on the Android Marketplace is fast catching up with those on the iPhone equivalent.

Speaking of the iPhone, I seriously believe Android has the potential to do some serious damage to Apple’s baby. Don’t get me wrong, the iPhone is a wonderful gadget, and led the way in the development of cross-over phone/PC devices. But the nature of Apple is to retain a high degree of control, meaning that ultimately there is only so much an application can do. The furore over the on/off approval of the Google Voice app also demonstrated the level of control Apple wish to keep.

In contrast, Android is a completely open source operating system, in the same way that, for instance, Ubuntu is open source. Developers can take the Android OS and change it at a very fundamental level to make it do whatever they want. Already we are seeing not just phones running Android, but media tablets too. You can be sure that there will be some very innovative uses of Android in the coming months and years.

I will blog more in future of other aspects of Hero ownership, but the main reason for wanting one was so that I could try out it’s mobile email and calendaring functionality. I’ve got to say that I am pretty impressed. I wouldn’t like to write a long email on the Hero, but for checking and making quick responses it’s a very capable device.

Like most people I have more than one email account. In fact, professionally I have 3 identities (it’s gets confusing at times) and I also have a personal email account. All these identities bar one use Google Apps to manage email, and the one that doesn’t will be moved over some time soon. Before I got the Hero my concern was that I would not be able to easily access all these accounts, or that the native Google support (more later) would baulk at Google Apps. I couldn’t find anything online that definitely said this was not the case, so I fired up the Hero for the first time with a little trepidation.

I needn’t have worried. The inital setup process takes you through the setup of a single Google account for sync purposes. The syncing includes email, calendar and address book, and so far appears to have worked extremely smoothly. I did have to choose one of my three Google Apps accounts as the ‘primary’ account, but this wasn’t necessarily a bad thing as it forces you to have a central contacts list (calendars can be organised differently as we will see). Was Google Apps a problem? Not in the slightest. Whether you have a gmail.com or googlemail.com address, or use Google Apps to manage your domain and host your email, the Hero will cope.

Once your central Google account is set up, you also have the option to add multiple POP3 or IMAP accounts. So all my other alter-egos were entered as IMAP accounts. There’s no calendar or contact sync, but for me that wasn’t a problem. Once set up, the device will check for new emails on a regular basis and inform you in a pretty discrete manner when any arrive.

Being a touchscreeen device, and given that I don’t have the daintiest of fingers, I was expecting typing to be a problem. However, it’s actually pretty good. For a start the touchscreen is very nice indeed, very sensitive so the merest brush against it’s surface is enough to register a keystroke. The key you have pressed is immediately shown in a pop-up window directly above the key itself so that you don’t have to take you eyes away from the keyboard to check the email body. And finally, a haptic-like response (actually a small vibrate) is used to confirm that a key has been pressed too. Typing in portrait is possible with care, but switch to landscape and you can generate a decent speed.

I mentioned calendars earlier, saying that only one Google account can be sync’d. It is actually possible to view and manage multiple Google calendars still, and it’s all down to how you have your main Google APps calendar setup. If you give manage access to the other Google calendars and then add them to your main calendar, they will automatically appear on your Hero. I was impressed. This is a slightly involved process which I will describe in the blog soon.

There is so much more to discuss about the Hero, but that will keep for another day. In closing, if you have a Google account and want a mobile email device, you should go for an Android phone. If you don’t have a Google account, an Android phone will still be a good way to check your emails, but you lose out on the calendars and contacts. It might still be the best option for you, but you’ll need to do your homework. Of course, if you’d like to migrate your existing account to Google Apps then you know where to come 🙂

One last point to consider, Android phones are pretty scarce on the ground at the moment, but they will start coming think and fast in 2010. Some will be the ultimate road warrior devices, with a price tag to match. Others will be aimed at social users and will be available for little or nothing on a mobile contract. The iPhone will need to become cheaper to obtain if it is to survive, as it no longer can claim to be head and shoulders above the competition on functionality and ease of use. So even if you buy an iPhone next year, you should get a much better deal thanks to Android.