The case for mobile-friendly 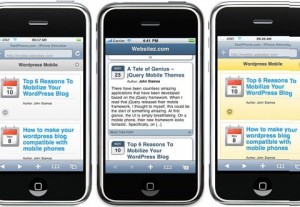 Until recently I haven’t been strongly recommending that customers make their websites mobile friendly. Then something happened to dramatically change my view. Something I wasn’t sure would ever happen. What was this earth-shaking event? Well….my wife got a smartphone!

Let me explain why this is so momentous. My wife, I’m sure she won’t mind me saying, is a tad suspicious of technology. I wouldn’t go so far as to call her a luddite, but it’s fair to say that she has a very healthy disregard of electronic gizmos and gadgets. Her view, until recently, was probably only reinforced by a succession of recalcitrant laptops and Windows Mobile phones provided by work that did anything but make life easier for her.

But in the last couple of months that view has changed a bit, and all because she needed a dictaphone! Her work IT guys decided that instead of providing a dedicated digital dictating device, they would instead give her an iPhone running a dictation app called BigHand. Their view is also to move her emails, etc. onto the iPhone too, although that process is not complete yet. So for now she has two work mobiles, and the contrast between the super-slick iPhone 4s and the steam-driven HTC running WinMob 6.5 is, frankly, rather stark!

Whilst I’m more of an Android guy myself, I was interested to see how my good wife would take to Apple’s finest. She had been using my old Nokia E31 as her personal phone for ages, but from time to time had wondered if a smartphone would be better. Since, as a family, we use Google Apps for email, calendaring, etc. I figured that an Android phone would be perfect. But she had never been able to get very enthused by the prospect. Might that now change?

Early signs with the iPhone were good. BigHand is a very slick app and it met her immediate need very well. The general performance of the phone was good, and the usability was light-years ahead of the Windows mobile. Within a couple of weeks we were having a serious discussion about replacing her Nokia with an Android phone, eventually arriving in the form of a HTC One C.

Life with an Android

A couple of weeks in, she is very impressed with a few things about the new phone.

So what’s the lesson for businesses? Imagine your typical customer. For some businesses they may be relatively young, or a bit geeky, and so more likely to have and use a smartphone. For other businesses their target market may be less likely to be smartphone owners….yet! But if my wife’s experience is in any way typical, then you can be certain that the situation will change, and probably very quickly.

How many of those silver non-surfers, for instance, will try out their grandchild’s iPhone and find it really quite intuitive? How many people upgrading their steam-drive mobiles will find that an Android handset is as cheap as any other option? And once they have a smartphone, you can be absolutely certain that they will start using it to browse websites. So do you really want them to go to your site and find it impossible to navigate?

As I mentioned earlier, I have been recommending to clients that they consider mobile-enabling their websites, albeit not too strenuously. If you read my blog post from that time, the lack of urgency is pretty apparent. Now I feel the need to be mobile-friendly is higher, but the methods of achieving that goal are the same. So I would encourage you to go back to my earlier blog post and read the recommendations. Alternatively, get in touch directly and I will help you decide the best course of action.